Chinese officials announced year-on-year 6% GDP growth for the third quarter, which was slightly below consensus estimates of 6.1%. The main drag on the economy was slowing investment growth while factory output rose along with retail sales. Tightening credit conditions are also contributing to the moderation in growth as officials continue to address excesses in the financial system. The on again/off again US trade negotiations continue to be a source of uncertainty. The government’s target of 6-6.5% growth for 2020 is at odds with market forecasts. The International Monetary Fund (IMF) is expecting Chinese GDP to fall below 6% to 5.8% in 2020 and continue to moderate in subsequent years, slowing to 5.5% in 2024. In the near term, Chinese officials have ample fiscal and monetary flexibility to manage the economy. However, in the long run, the adverse impact of the one child policy will cause demographic trends to deteriorate rapidly. The National Bureau of Statistics previously announced that births dropped to 15.2 million in 2018, representing a 12% annual decline following a decline in 2017. Some see China’s population beginning to shrink as early as 2027 and others argue that it had already begun in 2018. A rapidly aging population will place strain on social services and likely constrain China’s fiscal flexibility in years to come. 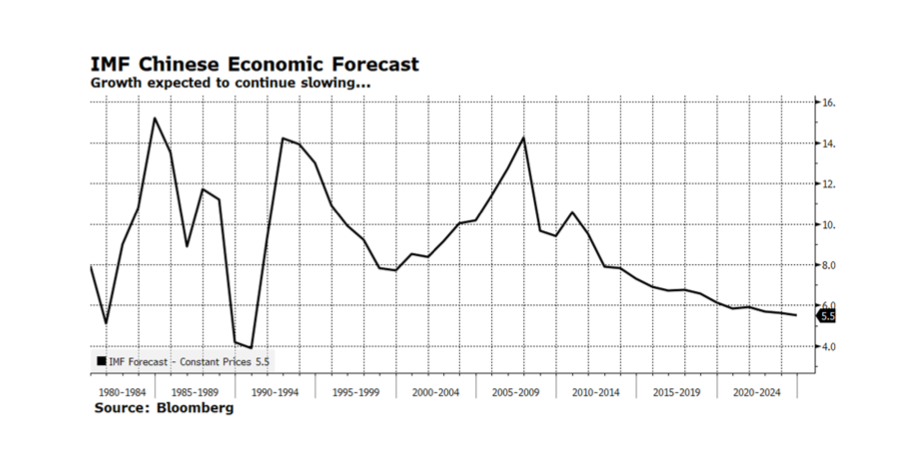 Chart of the Week, China

How To Reach Us

Theme by Anders Noren — Up ↑